The world of equity funding portals and online marketplace lending continues to attract the attention of institutional investors, and their involvement in the industry appears poised to grow. I review market insights, venture and enterprise adoption, and how it affects everyday retail investors to provide insight to what large institutions think about the burgeoning sector, and where we are headed. 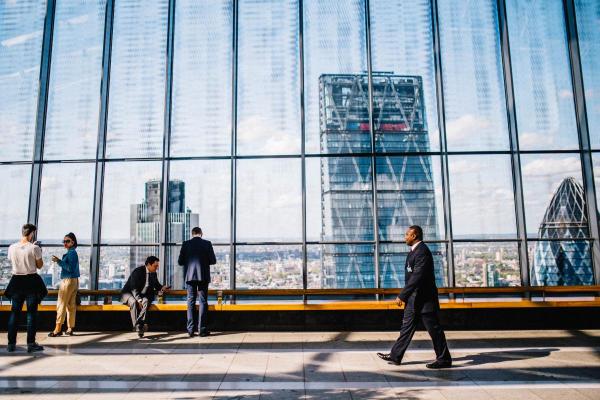 According to University of Cambridge & Chicago Booth School with KPMG & CME Group 21 percent of Equity Crowdfunding comes from institutional investors. This report was published in 2019.  The authors state, "institutional funders continue to drive alternative finance volume throughout the industry – and this is especially true in debt models. 88% of overall funding generated in the USA came from institutional funding – accounting for $37.6 billion." Equity is much smaller percentage compared to other alternative financial sectors that are more mature. 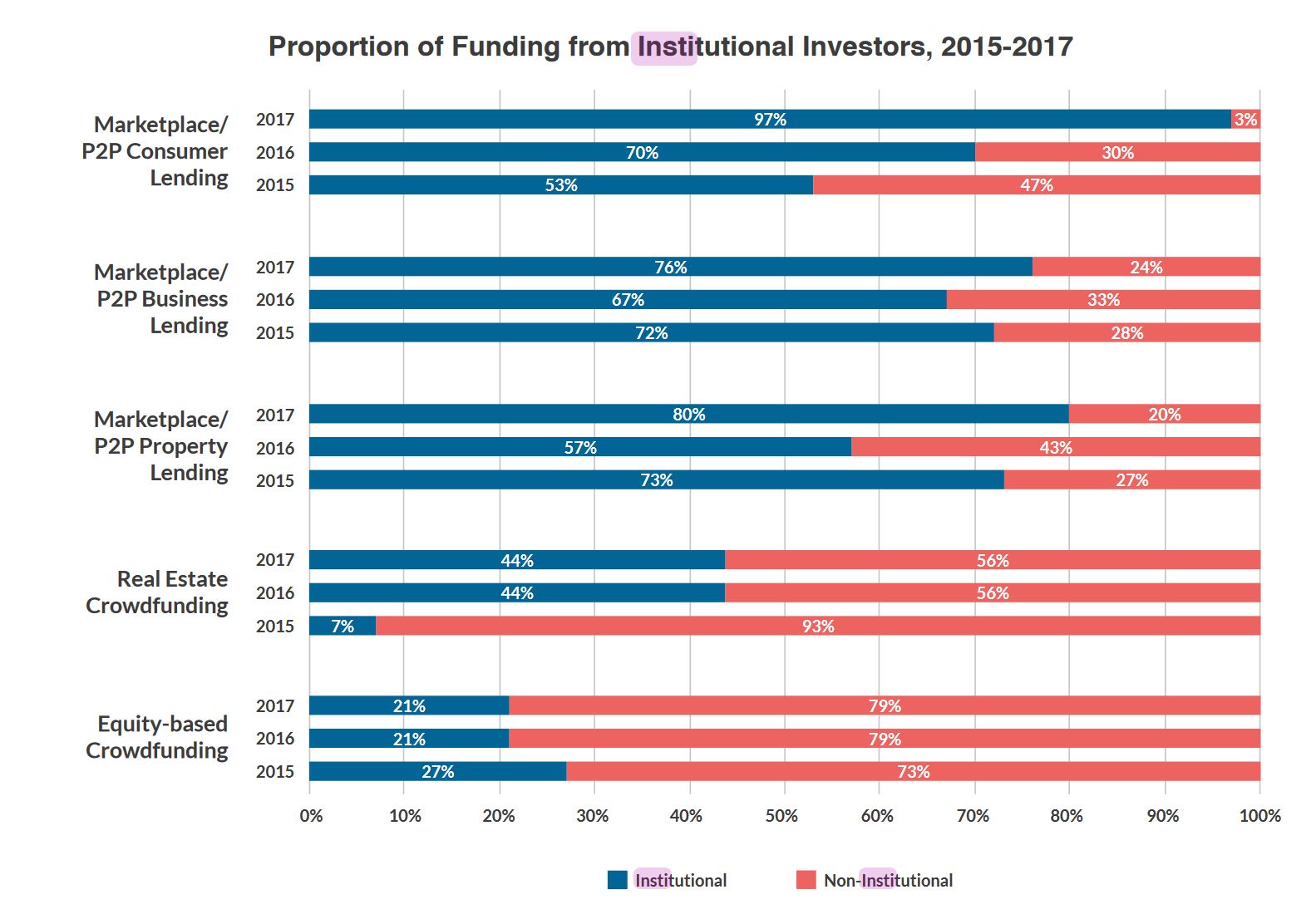 Richards Kipped & Orbe LLP and Wharton FinTech have released their 2016 Survey of US Marketplace Lending, which surveyed more than 300 institutional investors. Optimism abounds for the future of marketplace lending, with more than 80% of those surveyed believing that a bright future lies ahead. Those surveyed did express some concern about the future of the regulatory environment, and a good majority of respondents believe that a round of consolidation is likely on the horizon. I was not able to find an updated version of the report for 2018.

“The unchecked optimism toward this industry, combined with the fact that it is still maturing, makes it an interesting one to watch, particularly for institutional investors that sense opportunity,” said the Wharton Fintech President, Uday Seth.

While the report points to a prevailing sense of opportunity amongst the institutional investor crowd, not all professional investors are fully on board. A recent post on the Forbes website outlined some of the concerns from the ‘I’m smarter than you’ crowd, which included the inexperience of crowdfunding investors, as well as the increased risk of startup investing.

Several former big players on Wall Street have have left their posts to focus on Fintech investments. Included among the old guard that have a newfound interest in the financial technology sector are former Citigoup CEO Vikram Pandit, and John Mack, the former CEO of Morgan Stanley. Both of the former Wall Street heads have made substantial investments in the sector, which points us to the potential that the emerging industry presents. 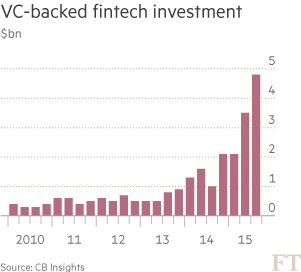 Vikram Pandit invested in TransferWise, the cross-border payments company,  CommonBond, an online provider of student loans, and PeerIQ the credit risk assesment firm. He was among a group of investors, including former Goldman Sachs co-president Jon Winkelried, who put $2.7m into Orchard, a data and infrastructure provider for the marketplace lending sector. He also invested in MMKT Exchange, which is developing technology to improve liquidity in the secondary market for loans. He is now investing through the Atairos Group and The Orogen Group, independent private companies focused on supporting growth-oriented businesses. Atairos was launched in 2016 with more than $4 billion in committed capital. John Mack has invested and is on the board of LendingClub which he owns 2.4 million shares of and took part in a $10M funding round for credit rating startup New England Funding Technologes (NEFT). He is also an investor in Orchard along side Pandit. He invested in Dataminr, which analyses social media to create alerts for traders.

AngelList Syndicates are attracting top tier venture capital firms Sequioa (Lifx), Andreessen Horowitz (uBiome), Khosla Ventures (OpenDoor), Accel Partners (Gametime). These firms are qualified as top firms according to CBInsights report of General Partners ranking one another. Syndicates employ a market design feature that divides labor among participants. Lead investors conduct due diligence and monitor progress on behalf of those backing the syndicate. The lead investors and entrepreneuers endure  reputation and financial penalties for poor performance and enjoy rewards for positive performance. As Christian Cailini of MIT states, this aligns the incentives of leads, backers and entrepreneurs in a manner that directly addresses information asymmetry problems.

CSC Upshot Ventures based in Palo Alto, CA. managed by Hone Capital (a subsidiary of the CSC Group) and Upshot Ventures, is a premier early stage venture fund concentrating on offering seed capital to tech companies at scale. The CSC Group, the fund’s largest investor is one of China’s top private equity firms committing a generous investment of $400M for startups on AngelList (2015). The first $100M was deployed through the VC fund CSC Upshot. In close partnership with AngelList the two subsidiaries have forged a new model of venture investing based on the needs of founders, investors and startup communities. Several AngelList officers also advise this fund.

Maiden Lane based in San Francisco has worked with over 125 individual angel investors and invested in 300 startups since launching in 2014. The Funds investors include Top Tier Capital and Makena. In partnership with AngelList and Accomplice they launched Angel Funds. Maiden Lane invests $35M from their Limited Partner commitment.

E-Merge: a 3 partner Angel Fund based in Brussels. The company was founded in 1998, E-Merge has made 40 plus direct early stage investments mostly as lead investors (25+ in the EU & 15+ in the US) and 200+ investments through AngelList Syndicates. The companies preferred business models are SaaS and Marketplaces. Their main areas of interest are E-Commerce Infrastructure & Internet Infrastructure (with a special focus on payment systems), SMB services, Autonomous Vehicles (especially flying ones), and NewSpace opportunities (CubeSats services). Since 2016 E-Merge invests exclusively through via the AngelList Platform.

ZPX KiloAngel: is a premium Silicon Valley (SV) seed fund opportunity that ZPX is collaborating on with AngelList and Kilowatt Capital, a leading SFO-based proprietary investment firm. KiloAngel has been invited to become an Angellist platform seat-holder, which guarantees KiloAngel access to all deals, pro rata allocations, and data, as well as to operational, administrative, and advisory services. This allows KiloAngel to use AL’s proprietary data filters, syndicate lead system and compliance services to scale investments across a large number of start-ups in an efficient manner.

AngelList and Access Funds: one investment grants an investor access to 200 startups. Investors receive exposure to multiple sectors, stages and geographies. Several funds under $15M, raised from investors on AngelList and managed by AngelList Advisors. Funds invest in deals negotiated and led by a select group of angels and venture capitalist firms.

Some large global businesses have tried the equity crowdfunding model. Indiegogo launched an equity based portion of their crowdfunding platform in partnership with Microventures in November 2016. They were offering Title III investments to non accredited investors at as little as $100. After a few years Indiegogo ended up shutting the partnership down. Digital Federal Credit Union (DCU) opened up their own platform, Growth Fountain. DCU is the 14th largest Credit Union in the US according to MX.

While institutional investors have some concerns about the future of the regulatory environment and the risks associated with crowdfunding, we’ve gained a little bit of clarity on how things will start to play out on the individual investor side. Title III of the Jobs Act came into effect, and with that comes the removal of the handcuffs from individual investors.

Previously, accredited investors had the pick of the litter when it came to investing in the next big thing, while the little guy was forced to sit on the sidelines and patiently wait for an IPO that would likely be out of his reach. With the new rules, individuals can invest up to $2,000 in exchange for equity. Startups will also benefit from the new rules, to the tune of now being allowed to raise up to $1 million per year via crowdfunding. For those itching to get in the game and ready to put their $2,000 to work for them.

Sifting through offerings and information available in this alternative financial technology market can be time consuming, and sometimes leave you walking away even more confused. At FundWisdom we make it easy to navigate the various platforms, costs, and trends.