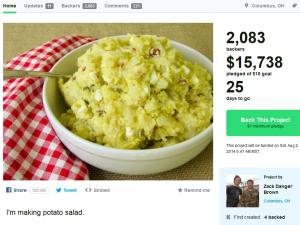 Looking to raise funds from investors to pursue your dream? Crowdfunding opens the door to a variety of different investors interested in what you may have to offer. Equity crowdfunding can help build companies, which creates jobs and, if successful, returns for those who invested money. Sometimes the result is very handsome returns. Rewards-based crowdfunding does not bear this promise, but even still, vast amounts of money go into these campaigns, such as $44,989 into potato salad.

Is it ridiculous for a person on the internet to donate money to a man who had never made potato salad?  We don't even know the mayonnaise he's going to use ...

Once Title III passes, individuals, including nonaccredited investors — a majority of the population, can then put their money into real businesses. Title III holds a promising future for anyone who wants to invest in startups and gain some financial return.  Some people who donate to rewards-based campaigns believe in the startups' dreams; people believed in Zack Danger Brown's dream.  But I just want to shed light for all those nonaccredited investors that soon there will be a market where you can help a business reach it's goal while receiving a return on equity. Therefore, the people on the internet who donated money to Zack Danger Brown will have something other than a bowl of potatoes to fund.  Once Title III passes, you can invest and hold equity in a company with potential — rather than a video of a guy making potato salad. Have these people been missing out on YouTube?

Crowdfunding is becoming a new frontier for investing. Rewards-base platforms tend to attract bizarre projects. The odd projects floating around the internet are sometimes successfully funded. This will not stop, even after Title III is passed. Once Title III passes, there were will an opportunity for the average person to invest. Start to get excited about what is to come!  At FundWisdom, we have a number of promising startups to invest in.  Learn more about the changing legal landscape and when the remaining 99% can invest.