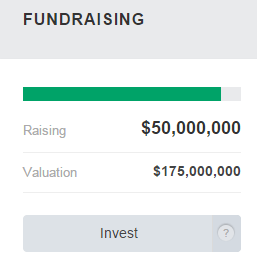 There were 2 leads on the $1.2 million invested online via AngelList, one at $110k the other of $1.1 million. The AngelList company page states $50 million in funding, the total funded on the summary page in the search section states $74.15 million, and Forbes states $500k, or 1 percent was raised by AngelList.  Throughout the year Life360 was listed at $50 million on the company page. Even though a small percent was raised through AngelList it is the first time a business raised series C money online. Chris Hulls, Founder & CEO of Life360 shared his pleasure with his ability to extend his offering to Angels at the Harvard Business School Cyberposium 2014.

This most recent round of funding is a $50m Series C led by ADT, the world's largest home security and automation company. The investment is tied to a commercial deal that will deeply incorporate Life360 into the ADT smart home, and Life360 will take over a significant portion of all ADT mobile development.

The first tranche, which ADT is leading with a $25m investment, is at a $175m pre-money valuation. $15m is open to existing and new investors beyond ADT. ADT is funding an additional $10m dollars when the commercial integration is completed. The last $10m will be at a floating valuation of $40 X MAU.

AngelList has a total of $74,150,000 raised in their summary view which is in line with Crunchbase, but it is over 8 rounds of funding only one of which AngelList was part of.

Additional Insights on the offerings